I don't think I've seen this done yet, so forgive me if this has already been posted. I've used the combination of FRStack and StreamDeck for many things including controlling my 4-square (8-direction) and 8-circle array. (see my VE3CKO QRZ page for details)

Now for a voicekeyer. I know with programs such as N1MM you can assign keyboard keys for voice keying and it works great but you have to be on focus and this can quickly become clumsy and awkward to use. So taking the tools on hand, the great FRStack program and the StreamDeck why not create some VoiceKeyer profiles. So I did this by using the StreamDeck to trigger a series of events that will play an audiofile through any Flexradio 6000 series. Separate buttons for CQ, QRZ etc. and can easily expand to have a separate folder for each type of contest, search and pounce or run station.

I will give an example of how to create one button, "CQ", use it to create your own, and then many more.

This is assuming you already have some knowledge of FRStack and that you have a bunch of audio files already created, if not you will of course have to do that, and label them so you can easily identify them. I'm going to assume you know how to create audio files with a program such as Audacity. It will also assume that FRStack is already connected to your Flexradio and you are on the active slice you want to transmit on.

You will need to to setup a couple hotkeys in FRStack, DAX and MOX, this is what I used:

Then within StreamDeck you need a starting place for the voicekeyer so create a folder called VoiceKeyer. Then in that folder create a button by dragging the MULT-ACTION function from the right column of StreakDeck. In the Title field label the button "CQ" or anyway you want. The content field will say 0 actions. We need six actions in order to do what we want (see screenshot below). Simply drag the six actions: 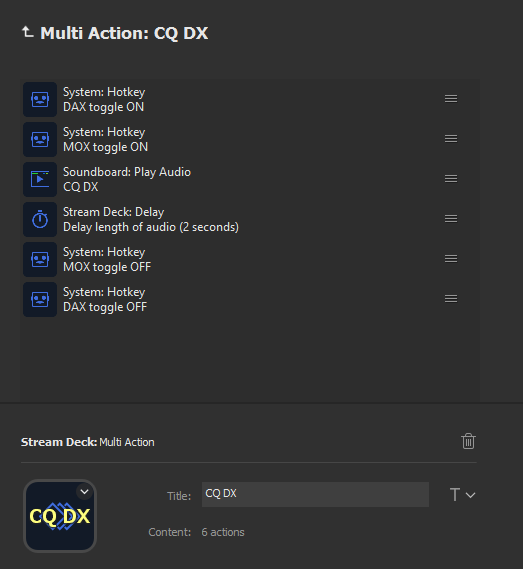 That's it, that simple. It will play the audio file through the radio on the active TX slice. Other buttons can be created faster by copying and pasting the button to an empty button space and changing the labelling and actions accordingly.