I must say that I was happy with the Palstar HF-Auto, it always did what it was suppose to do but it would often just go into tuning when transmitting even in manual mode and though it took some time to find an automatic solution it was far, far better than a manual tuner. For the amount of SO2R operation I do, there was no way I was going to buy a 2nd HF-Auto. When the specs came out on the Tuner Genius it peaked my interest and when the demo video came out it really sealed my decision to make moves to order a TGXL. I missed the boat on getting a free one as I got my PGXL long after the offer was over. I have had an Antenna Genius 2x8 since they first came out and up until now it's been a very good antenna switch but it's true capability wasn't utilized until the TGXL, read on.

As best as I tried to time it so I'd have the TGXL in possession before I sold the HF-Auto it didn't work out that way, so when I unboxed it six days ago I re-organized the placement of the 6700, PGXL and TGXL into a rack road case. It's a 40" rack-mount in a case on wheels with covers for front and back, I used when I gigged bars around years ago. (see picture below)

I said this will be a quick review. Since I have all my HF antennas going through the Antenna Genius, I used one port from the AG going to one antenna input on the HF-Auto. Anytime I changed to a different antenna on a band I would need to re-tune, 10 to 30 seconds later, sometimes it took a few times or I'd have to manually tune. To alter between different antennas on a band to see how I get out was cumbersome. Kinda got use to it but what the TGXL promised was a faster, more automated solution. Now that I've had it for nearly a week I can happily report that what was promised featured wise has certainly been delivered. What an amazing tuner. 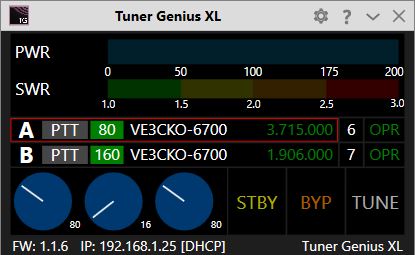 Setup was a breeze and the utility it similar to the PGXL and AG. It is much lighter than I thought it would be. Finding an automatic tuning solution is indeed very quick, for example I haven't yet tuned the 160m full-wave loop on 30m thru 6m. As I'm writing this I decided to tune the FT-8 window on each band. Most bands found and stored a solution in well under 2 seconds, 2 bands was slightly over 2 seconds. Like I said very quick.

The TGXL with the AG can have 20 memories per antenna, per band and you can have up to 4 antennas per band. OK, so what does that mean in actual usage? The idea is to go through each antenna on each band and find a tuning solution up and down the band. Once this is done, no need to manual tune. With confidence of a tuned solution for each antenna, I can switch between antennas instantly for "how's my signal now?"

On 80m right now I have just two antennas, a four square and the 160m full-wave loop so I went up and down the band every so much kHz apart, and also my favourite frequencies and stored a tuning solution doing this for each antenna. Now when I select either antenna on that band, using ANT1 or ANT2 on the 6700, the tuning solution is instant. What a charm.

Since the tuner knows what antennas you have for each band via the Antenna Genius some real cool things can be done. Within the TGXL utility you can tell it to bypass the tuner on a particular range of frequencies, on a per band, per antenna basis. This is of course for those reasonant antennas not needing a tuner, how cool is that!

Sometimes we have a multi-band antennas and want to monitor other bands simultaneously. With a manual tuner or any other auto-tuner in receive you can easily hit the bypass button/switch, but the problem is remembering to change it so the tuner is inline when transmitting. We've all run into that right. Well here is another genius feature. Again, via the TGXL utility you can set either Port A and/or Port B to RX BYP. This is a receive-only mode that will bypass the TGXL tuning solution when the exciter is in receive mode. To explain more, let's again use an FT-8 example say you want to monitor as many FT-8 bands your radio can handle using a multi-band vertical or loop antenna. I have the FlexRadio 6700 so I can monitor up to 8 bands at once. Ok, so if the RX BYP is set on Port A, and have ANT1 selected on each slice, the tuning solution would be bypassed while receiving, and of course when I select a band to transmit on, it will use tuning solution on that band. Voila!

I can but I won't go into great detail about the display, front panel, buttons and adjustments are just what and where you need them or on how simple and smart this is from a FlexRadio station integration standpoint, or how versatile it is to work with other radios using CAT, CIV or BCD.

This is a well thought out product with very smart features, "Tuner Genuis" is indeed an appropriate and a well deserved name. 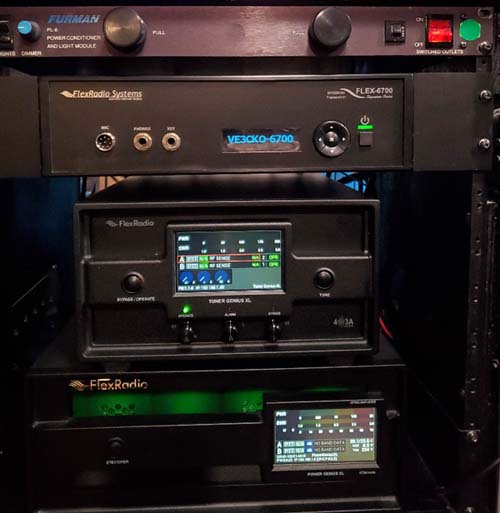