Alan Member ✭✭✭
April 2020 edited August 2020 in Third-Party Software
With the latest release of FRStack, Mark has added the ability for “non-local” clients to connect to his REST API.   Previously, the client had to be local to the machine running FRStack to access the REST API.   This worked well for the users of Stream Deck, but had to be "local".  Thank you very much, Mark, for this addition.

With these changes, we can now access Mark’s library of easy to use REST commands available on FRStack using Node-Red.   This compliments Mark’s UDP broadcast of Flex Meter Data.

The same could be accomplished by writing code to access the Flex API directly, but I found that mostly over my head and by using FRStack as the “in-between”, I can take advantage of the simplicity and added functionality that FRStack provides.

As an example, I wanted to add a “Tune” button to my Node-Red Dashboard for control of my Palstar LA1K amp.  I wanted to inhibit the RCA TX3 when I push the button, to prevent the amp from transmitting during the tuning process.

Another example of the functionality of Node-Red, I added a “PTT Gate” to the LA1K PTT output from RCA TX3.    The gate closes if the TX power of the Flex is above 50% power.  I do this with a relay and a GPIO pin output from Node-Red.   This ensures I do not overdrive the LA1K amp.   I have an LED on my dashboard to show the power set point and if the gate is open or closed.

Here is a screenshot of my control dashboard, including the Tune Button and Flex Meter data, derived from FRStack. 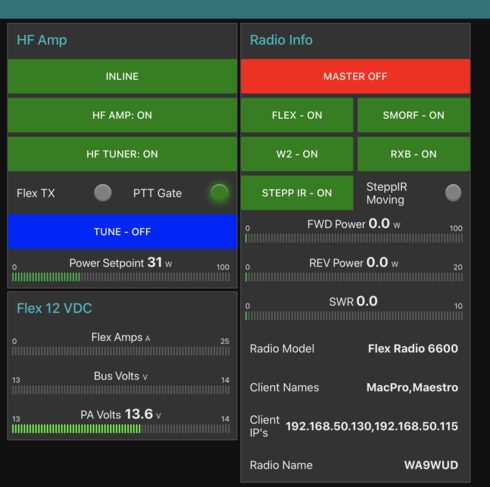 I can share any portion of this as anyone requests