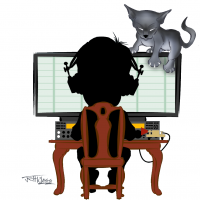 Mike_N1EN Member ✭
September 20 in SmartSDR CAT
A couple of days ago, I put in an order for a 6600M. I've been preparing my to-do lists for the coming project of reconfiguring my office/shack, so that I can hit the ground running during pockets of free time after it arrives.

There are a couple of things that I'm having trouble puzzling out from the documentation. Perhaps these will become obvious when I actually have the new transceiver in front of me...but I'll go ahead and ask now.

1. With a 6600, is it customary to have sets of COM ports defined for just slices A and B, or should I be planning to create sets of COM ports for four slices? (I'm thinking use cases such as chasing a DXpedition simultaneously on two bands, both working split; or SO2R operation in a phone contest, where I might want to operate split on 40m and/or 80m while also active on some other band.)

2. I enjoy playing in contests SO2R. If I want "normal" SO2R audio, including the ability to toggle stereo audio from both receivers, or select mono audio from one or the other, am I correct in suspecting that DAX is not the right tool to pass audio -- I'd need to listen to the output from SmartSDR if using a headset attached to my computer, or use a headset plugged directly into the transceiver? (I currently have three headsets in service in my office/shack -- one for my work computer, one for my shack computer, and one for the radio. I'd love to simplify that.)

3. I'd love to be able to play in a contest, with N1MM running on one computer, CW skimmer generating spots on two bands on a second computer (to take the processing load off the N1MM computer), and still have the ability to make use of the controls on the 6400M itself at the same time. Is this possible, or is the 6600M limited to two points of control / would I have to run SmartSDR on the contest logging computer for controls beyond N1MM macros? (Also, is Slice Master the preferred way to feed Skimmer, or is DAX sufficient?)

4. Regarding the built-in antenna tuner: does each antenna port have a discrete set of tuner memories, or is it a common set of ATU memories applied to both antenna ports? (For example, let's say that I had an antenna resonant at 7010, and another antenna resonant at 7290; could I avoid having to retrain the ATU every time I change antennas if I only used the 7010 antenna on ANT1, and the 7290 antenna only on ANT2?)