What is your backup plan when FLEX/SSDR crash?

Sergey KN7K Member ✭✭
May 2 in SmartSDR for Windows

Problem statement the same - cannot finish any contest without a freeze or crash. Maybe this is my luck with Flex eco system + Windows. As I said before, I am not pointing finger to Flexradio, I fully aware that "Radio" is combination of SW+HW, but as a whole package is not reliable (for me) and last weekend was another evidence that I need a backup plan in form of either another PC or/and another non Flex radio.

Last weekend story: it took me a long time to convince myself to work in 7QP Contest on May 1st. I won it before 4 times and set myself to try to beat my previous results. Previous week I made several hundred QSO on different bands with zero problem. Tested station evening before just fine - updated N1MM, set Macros and tested. Woke up at 5am, got my breakfast and got to the radio to listen what band to start. With Contest start at 6am, I got SSDR crashed at 5:55am. Quick PC and 6600 power cycle did not help, all I got was an empty screen 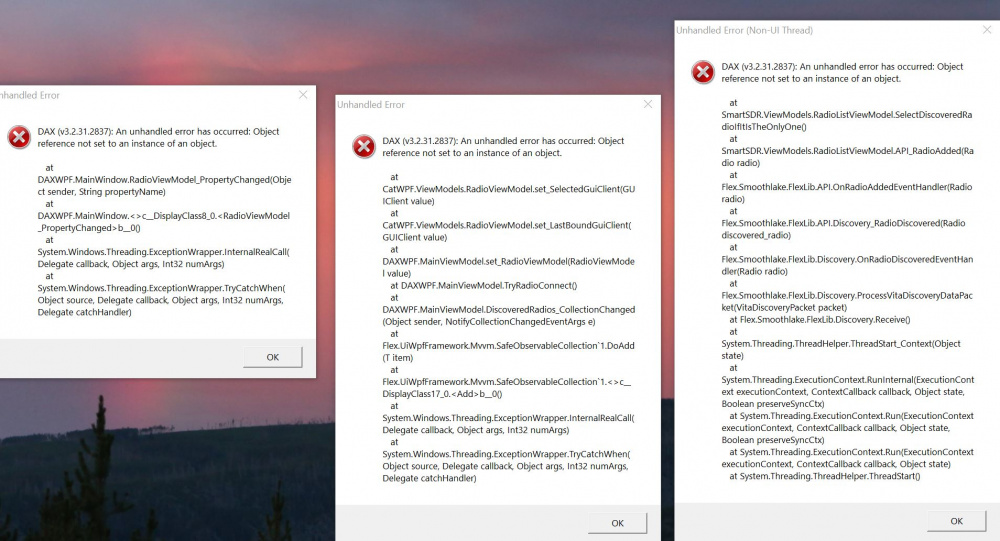 I kept troubleshooting to 7:30am, research the forum, swap network switch to another one, Open ticket without any hope that Flex support on weekend, restored my PC to a week earlier date. No luck. Fully frustrated I left my station for a few hours. Came back around noon, connected Maestro to 6600 to confirm that this is not radio problem. Maestro and 6600 works together, that leaves me with SSDR crash. Also, PGXL and AGXL Windows application works fine. I did not have any Windows updates last week and have no idea how to resolve besides waiting for a Tim's magic next week.

7QP Contest is waisted for me this year.

Now, after I calm down, I started to think about future dealing with such cases. Do I need to get another radio and another PC as backup plan?

Please, do not respond with "everything works for you" - it does not help. I asked for the help many times and if it my PC (see attached post in the beginning, that is more than powerful for Flex) I would like to have a procedure to troubleshoot it and resolve.

I would like to hear if anyone has a backup plan and how fast you can reconfigure your station when crashes happen and there is no immediate support.

P.S. Interesting note that my last year crashes while are different but also happened during 7QP Contest. Does N1MM kills SSDR with 7QP contest settings?