Control Panel not visible after upgrade 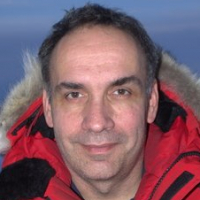 I carried out the upgrade to my 6400 mostly without issue. I had the situation where it did not finish the firmware update, and pressing the power button did not restart the rig, so I followed the directions in the release notes to remove power and it all then proceeded to the end. So far as I can tell in limited testing, it is all working as expected ... except that the Control Panel is nowhere to be seen. Previous to the update I had operated with it "popped out", and on a second monitor. Now it doesn't seem to exist.

Any ideas on how to get it back?