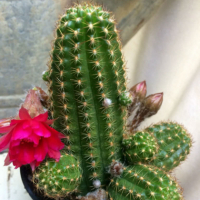 W7KHZ Member ✭✭
September 2018 edited January 2020 in SmartSDR for Windows
SmartSDR shows that my radio is in use on my local network (remotely controlled) computer, but will not allow me to "Disconnect User". For some reason the connection failed between the radio and the computer after leaving it up and running on WSJTX for several hours. I have reset the computer (remotely) and restarted SmartSDR seeing the same "In Use" indication and my computer name. This is not the first time this has done this. It also does it on another radio that I use at the local network I am on now. We have not yet installed a "brute force" remote power reset for the Flex Radio (6300) yet, but it now looks very necessary. I am 250 miles away from the radio now and will need to have someone else visit the shop and power down the radio. Why does the (these) radio(s) stay hung up like this? Is there not a internal watchdog routine of some type that disconnects the connection when it is no longer there after a significant period of time????? Does anyone have or know of a "secret" tool I can use to override this error, as the SmartSDR program can evidently talk to the radio, it just isn't "smart" enough to tell it to reset the frozen connection that it thinks still exists.
0