Ken - NM9P Member ✭✭
October 2014 edited June 2020 in SmartSDR for Windows
just put in several hours on the CQ WW SSB Contest.  This is the second time with the 6500 and I was able to triple last year's score! 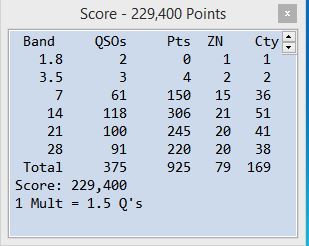 It is nowhere near what some of you "big guns" will report, but it is the best I have ever done.

Last year I had half the contacts and only 75,768 points.

I think I put in about the same amount of time, though I can't figure out how to get a time tally from N1MM+.

The differences this year?

I used N1MM+ with its voice keyer.  Total S&P operation.  Single Op, Assisted, Low power (Barefoot 100 watts.)   I never used a second slice or pan.  I was busy enough just keeping up with one.  (Someday I need to learn how to do SO2R, etc.)

Antennas:  #1: Instead of the 160 Meter Offset Fed Dipole, I used a 160 Meter Inverted 'L' (35' up, 90' over, with two 135 ft. radials radials 10 ft. off the ground.)  #2:  the same homemade 40 meter elevated ground plane as last year, but modified with two side elements cut for 20 and 10 meters.  (kind of like a vertical fan dipole)  with four fan radials at about 8 ft off the ground.
The Dipole at 38 ft. that I used last year might have been better on some of the closer stations.  My 40/20/10 vertical was better at distance in most cases.  I am very eager to get the T-11 LP antenna up!  I am sure my score might have been double again what this one was if I could aim the antenna towards the weaker multipliers, and away from interference.  NEXT YEAR!

The Panafall was VERY helpful when zoomed in to about 50 Khz width.  It helped me visualize that there were signals sandwiched between and overlapping two stronger stations.  I never would have seen them with the pan-display by itself.

Voice Keyer via DAX really helped save my voice, especially since I have been sick with Bronchitis for two weeks and barely had enough voice to lead worship on Sunday.  I put in about 5 hours on Friday evening, about 7 or 8 on Saturday afternoon/evening, and 3 1/2 hours Sunday to end the Contest.  My voice would have been gone without the Voice Keyer.  Nice!

This is the first time I ran using the spotting network, which helped a lot.  The bandmaping function on N1MM+ was very handy, helping speed up my band searches greatly.  The software worked very easily, once I got the voice keyer files set up correctly.  I lost some time figuring things out. (Hint:  do this BEFORE the contest, not during it, as I did!  But I had been ill and did't have a choice.)

I never figured out the Focus Helper for N1MM+, which would have saved me a bunch of time as I often forgot to click back to the N1MM window in order to use the Function Keys to send the Voice messages.  I didn't have time before the test, and didn't want to waste it during the test.

DAX lost connection several time... Never while actively operating, but often when I took a couple of hour's break, or overnight.  I had to close and reset DAX & CAT sometimes several times after returning after a break.  I hope FRS comes up with a solution soon...

I had many instances when I hit the F4 or F2 button to send a voice message and the rig went into transmit mode but it didn't send any audio.  Whn it returned to RX after "sending" the message, I hit the F4 button again and it sent just fine.  This is similar to what I have experienced occasionally when hitting my footswitch...no audio goes out, but TX mode activated.  Try again and it works fine!  I am not sure what is behind this.  It is random and very sporadic.  Luckily, it is also not very often.

ATU Memories will be greatly appreciated when they are implemented.  I spent a lot of time re-tuning the antenna whenever I changed from the Inverted 'L' to the Vertical.  That got very old.

Overall, this rig was a real performer!  As my report last year...
Brick wall filters,
Low RX noise, means lower operator fatigue.
TX profile much easier to adjust than last year,
RX EQ was very effective,
Flex Control Knob was essential for my operating style.  (Sorry Stu, I didn't have time to try to integrate your Ipad Controller into my operation.  Too many new things to figure out at the same time this time.)

When I get my tower and LP antenna up at 58 ft. I will be able to run a frequency and kick some real ****!  Especially if I can come up with an amp to go with it!

Not a bad effort for a semi-skilled contest operator with moderate antennas.
But it was fun!

Now you other contesters...Let's hear your brags and feedback.  I know you will **** my score out of the water, but I am glad to be making progress!  You guys help challenge and motivate me to improve my station and operating techniques!