I recall a previous discussion about the SWR limit of "10" for the Tuner Genius. On the talk list for SteppIR antennas, there was a comment made that he use of Tuners could mask a high antenna SWR and cause damage from high voltages or currents.

Anyway, I want to forward an explanation of the basis for the poster's comments, which I believe gives insights into why trying to tune something with an SWR greater then 10 in not a good practice. 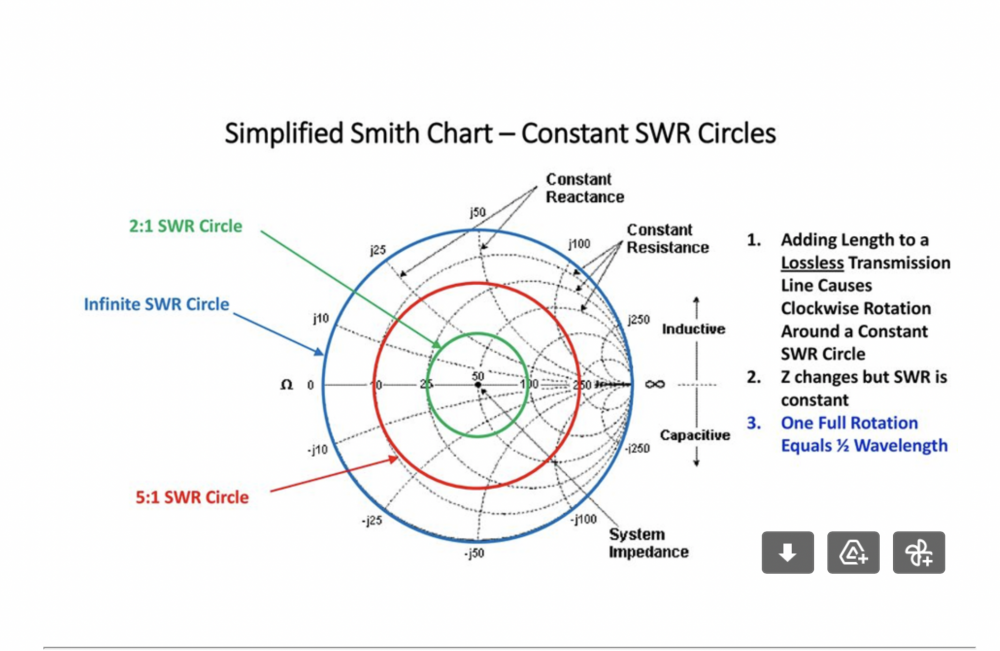 Respectfully, I think this is best understood by simply applying Ohm's law and Bill's simplified SWR equation below.

If something goes wrong at the antenna end of a transmission line that causes a 10:1 VSWR on the line, it is because there is a bad (and probably unknown) terminating impedance right at the antenna terminals that is causing it. Simply by measuring the SWR, we don't know what this impedance is because there are an infinite number of termination impedances that could cause a 10:1 VSWR reading. Plotting these impedances on a Smith chart, they form circles that we know as Constant SWR circles.

I think you would agree that no matter what you do at the other end of the coax run (tuners, etc.) nothing will change the actual IMPEDANCE of the antenna as seen at the antenna terminals. For any given fault condition, that impedance is a constant.

It is easy to understand two points on the SWR circle where the faulty load impedance might be purely resistive. This of course would be highly coincidental but let's look at these points because they simplify things.

Purely resistive loads of 500 ohms and 5 ohms would both present a 10:1 VSWR on the 50 ohm coaxial line. Note that in my hypothetical fault condition these are real impedances. Now, if we were to somehow pump 1500 watts into these loads (for example by using a tuner at the other end to force power into the system) in one condition we would see much higher VOLTAGE (in the case of a 500 ohm fault) across the antenna terminals and in the other case we would see much higher CURRENT (in the case of 5 ohms) flowing into the antenna terminals.

Either way, too much voltage or too much current is not good for the balun which represents your load. The balun likely wasn't designed to operate under those conditions and bad things may result.

Bill is absolutely correct: using an antenna tuner with an antenna system that has a balun is bad practice. Tweaking in a 1.5:1 VSWR probably won't hurt anything, but what happens if something prevents the antenna from tuning properly? We all know that happens with these antennas. With a high power auto-tune amplifier in the circuit, you're running a great risk. Granted, most of these amplifier tuners can't handle anything higher than a 3:1 VSWR and you might get away with it ... but are you sure?