No slice, No audio, Power zero, Transmit Inhibit ON, No keying of amplifier, Maestro & 6600M 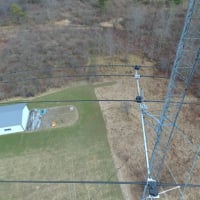 David Member ✭✭
February 2020 edited February 2020 in Maestro
I don't know how it happened, why it happened or when it happened.  I don't know if my "fix" is even appropriate.  I wanted to operate the WPX contest by remote.  I had the 7610 working but it was too cumbersome.  I decided to setup the Flex and after some experimentation and hours upon hours of trial and error, I got the Maestro to show up in N1MM+, MTTY to hear the Flex, the Flex to actually hear the transmit RTTY from the program and the digital interface to read MTTY with spots showing in the program.  I said, with all of this I am all set.  I worked ONE Italian station on 20, while the remote amp was warming up.  All I could get for power from the Flex to the antenna was about 40 watts.  The amp was on, but ignoring the Flex.  I tried to reset the 6600M by remote control.  No difference.  I reset the Maestro AND the 6600M, no change.  I changed to CW with the Flex.  Only exciter output.  I put my remote K3 on line, turned off the Flex, and the K3 keyed the amp without any difficulty.  I thought that I might have disturbed the keying line to the amplifier while working at the station in the last few weeks, so after fixing a broken boiler in my house (cold and no hot water), I made the trip to the remote station.Here is what I found:The Flex 6600M was ON but there was no audio.  There were no slices, that is A and B VFO's had NO assigned frequencies and would not illuminate with frequencies when I depressed the screen.  The Menu system worked.  Power indicated zero watts  (normally set to 85w) on all bands and none of the little check boxes were checked on the transmit menu page.  Transmit inhibit was ON (showing in Red letters) and nothing but nothing would restore normal operation of the radio, including turning off transmit inhibit.  I tried checking the complete menu of the 6600M for a different setting or finding something which might indicate a problem or correct the situation.  I powered it down for another time but no change in the operation status.  I could not find anything.  I started touching this and that on the 6600M.  When I touched the A button, out of some desperation I might add, a slice appeared and audio started.  The Flex then transmitted and keyed the amplifier as if nothing happened.  My questions are what exactly happened here and how does one correct this by remote operation if it happens again?  Obviously nothing I was doing was helping by remote control and worse, I can't say exactly what circumstance generated the failure.

I posted this at groups.io but there were no helpful responses.  Perhaps some assistance here???  Not that I think it will matter much but I have the latest version 3 software loaded.Another contest down the drain.  Oh, well.  Thanks for any help this posting will generate.
0