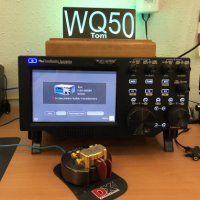 Tom - WQ5O Member ✭✭
October 2019 edited October 2019 in SmartSDR for Windows
My WSJT-X install is reporting "an error opening the audio input device has occurred" when I load the program.  It won't connect to my DAX channels and I can't copy any of the digital modes using WSJT-X.

I was originally running the 64bit version of WSJT-X when this all started.  I uninstalled the 64bit version and then installed the 32bit version.  Still didn't work.  I've had no luck with it resolving itself.  My audio inputs and outputs in the device manager looks good, too.  Doesn't matter which DAX Channel I use.  The error is the same. After I updated the SmartSDR software to the V3.1.8.145 the WSJT-X software continued to worked fine.  Then, out of the blue, it's stopped working.

I don't see the issues of corrupted inputs in my Device manager like when I did the 1803 updated last year.  The inputs were pretty hosed after that update and with the help of the community board I was able to correct those problems.  I don't see that problem this time.

I'm sure this was a MS software update/tweak that caused this.  I normally can figure these things out but this one has me stumped.  Anyone else had this issue?  If so, what did you do to correct it?  Thanks.