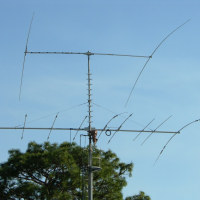 Dewey W0YWW Member ✭✭
March 2019 edited June 2019 in Power Genius XL Amplifier
Noted that Flex Release Notes for PGXL firmware 3.1.2 is dated Mar 19, 2019 and states following:
"The primary purpose of Firmware release 3.1.2 is to resolve the falseHIGH SWR alarms experienced by some PGXL users in the 160 Meter and 80Meters frequency ranges.
There are significant changes in the way that the SWR alarm systemoperates. Previously, there was a single SWR alarm detector in the PA,that would see both an SWR event external to the amplifier, andinternal events such as a filter box failure. In this new version,there are now two SWR alarm detectors, one after the filter box thatonly looks at external (antenna system) SWR events, and the detectorinside the PA has been changed to alarm on high reflected power.There have also been some more tweaks to the fans. You may hear thefilter box fan running, whenever you transmit on 20, 10 and 6 Meters,and the PA is warm or hot.
The front panel display will now wake up, anytime displayed datachanges.
Rather than recall all amps for recalibration with the new SWR alarmsystem, this firmware includes a default calibration that should workfine with the majority of amplifiers. There may be a small number ofamplifiers that require calibration adjustment over dial-in, or someother action.
Any new amplifiers, or amplifiers in for service, that shipped on orafter March 18, 2019 have been specifically calibrated for the new SWRalgorithms.
There have also been many other bug fixes.
Once version 3.1.2 has been installed, we recommend not backing up toprior 2.x.x or earlier versions, without specific instructions ordirections to do so from FlexRadio Support."
1