Scott Russell - N1SER Member ✭✭
November 2018 edited March 2020 in New Ideas
Colorize the selected band button as a visual reminder when going into the Band menu on the left side bar. Colorize the button when changing bands as a visual confirmation. See my example image.

I know we have the large frequency display on the flag but it would be nice to have a visual indicator of which band you're on or changing to when in the Band menu. 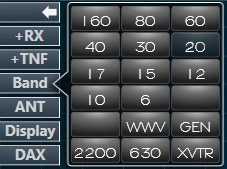