For those who do not receive the PG XL Insider updates, below is the second installment of PG XL design details from Flex.  This time focus is on the diplexed filters and harmonic dummy load.

From the schedule side, looks like testing/production of Tuner Genius is on hold for the time being while PG XL production is ramping up.

This week I would like to share another of the unique design features of the Power Genius XL, the incorporation of diplexed (high pass/low pass) output filters. While this feature adds cost and complexity, it significantly enhances amplifier linearity and materially reduces harmonic output. Other amplifiers in the amateur market exclusively utilize low pass filters.

On Power Genius XL, the high pass filter passes only the harmonic frequencies to the 500 Watt dummy load where the harmonic energy is transformed into heat. The low pass filter passes only the fundamental frequency to the antenna. This means that harmonic emissions are reduced by as much as -20 dBc compared to other products. This is very important in SO2R and multi-op contesting and further reduces QRM to others on the bands.

In other amplifiers, the harmonic energy inherently generated in the amplifier stage, is reflected off the low pass filter and ends up back in the output stage transistors, which reduces linearity and increases heating in the transistors and filter components.

Significant heat can be generated in the filter components themselves, especially as frequency increases and the skin effect becomes more dominant.

Power Genius XL incorporates significantly larger T-157 (1.57 inch) toroidial filter inductors on the lower bands, and silver plated 3 mm copper coils, which are pivotal to optimal performance during legal limit high duty cycle applications such as FT8 and RTTY contesting. We also use highest quality capacitors sized in current and voltage ratings for the application. All filters and the associated harmonic dummy load are assembled in the commercial grade module shown in the photo below. A visual comparison of Power Genius XL construction to other products speaks for itself. 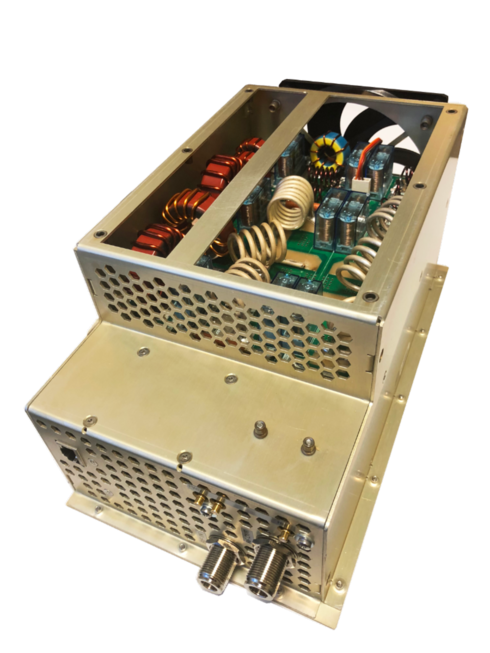 As communicated in previous updates, we are in the process of completing the remaining filter module upgrades to all previously shipped amplifiers. The upgrade resolves an issue reported earlier that was discovered on 6m when running FT8 continuously. We have incorporated heavy gauge silver plated coils on 6m and 10m (see photo above) to significantly enhance skin effect conductivity. This has enabled us to meet our design goal of providing legal limit power on all modes and bands even under the most strenuous operating conditions.

Based on our current upgrade throughput we remain confident that we will resume production shipments to our pre-order backlog beginning in November. I don’t have an exact date yet but you will be contacted when you come up in the list. Since we have been primarily focused on delivering the amplifier, work on Tuner Genius has been temporarily delayed. Once we resume production shipment flow, we will return to completion of testing and production roll out of the tuner.

We continue to receive a high level of interest regarding sales of Power Genius XL in Europe and other parts of the world. Our initial orders were from US customers as FCC certification was received in advance of CE certification. While CE certification has been completed, we are not yet ready to begin shipments outside the US. This amplifier will still need to undergo rigorous testing, but we are keeping an interest list for those who wish to be contacted when we begin sales in other areas of the world. Regardless of your locale, please contact [email protected] if you wish to be added to the growing list of customers interested in this transformative product.