After the "Tim" bible of uninstalling all com ports, uninstall of SSDR 1.11.12, No Joy

Jim KJ7S Member ✭✭
November 2017 edited January 26 in FLEX-6000 Signature Series
After the most recent Winblows 10 update, my normally flawless com port configuration went to lunch and has yet to return. I've gone to the letter of Tim's "bible" notes of uninstalling ghosted ports, hidden ports, and all others except for my Com 1 and the LPT port. Uninstalled all SSDR versions, the Flex VSP stuff, manually dumped folders and registry entries where possible. Rebooted PC, installed SSDR 1.11.12. Keep in mind I've done this thrice in the last 4 days. I keep getting the fabulatech ports in the "other" slot, not properly installed. A "repair" of the Flex VSP doesn't fix anything and I cannot configure a new port from the Cat 1.11.12 since when I try and save a chosen port, for either slice on the 6300, it fails to complete.  The most recent update was 11/14 (KB4048955)  Any Help??  Radio still connects fine on lan but I can't run any of my usual  digital stuff since there are no usable vsp's.  Here's a pic: 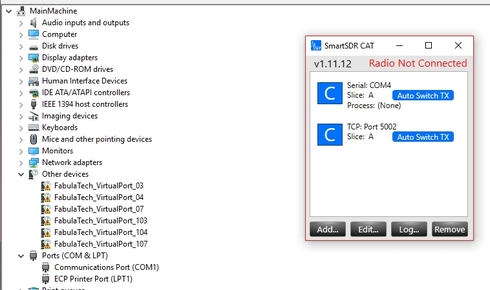