N4TTN Member ✭✭
February 2017 edited June 23 in FLEX-6000 Signature Series
So I am having some network issues with my Maestro. I am currently WIRED on my network with the Maestro. I am connecting to my 6500. I have Gigabit Ethernet switches on my network and the traffic is not running through a router to get from the Maestro to the radio.

There will be times where the network quality is POOR and I will be dropping packets. The network quality will bounce between poor and fair and occasionally reach the  good range for a few seconds then drop back down into the poor range.

I can fix this the majority of the time by rebooting the Maestro. Sometimes it will take a couple of reboots to get the network back to the excellent range. When it shows excellent it is usually rock solid with almost no dropped packets and will stay that way until the next time I turn it on.

I am not going to be troubleshooting my network as I can assure you that this is NOT a network issue. I have read some other posts with people that have had the same issue and all the common factors point towards the Maestro.

There must be some sort of bug in the Maestro. No way this can be my network because I don't have any other issues besides with the Maestro.

I have tried using DHCP and setting static IP's on both the 6500 and the Maestro and get the same result either way. I am not using wireless on the Maestro.

Is there a bug reports for this issue? 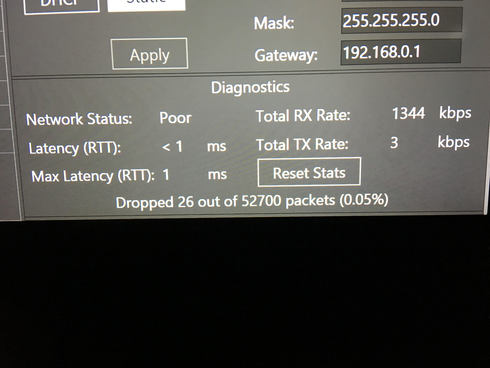