Ken - NM9P Member ✭✭
August 2015 edited June 2020 in SmartSDR for Windows
After dealing with family business, I sat down to begin the contest three hours late and discovered that a Win10 update required a de-install/re-install of SSDR and FlexVSP AGAIN.  48 minutes later, I made my first contact at 21:48Z  almost 4 hours late.

By that time, the only band that was useful on my new T-11 LP antenna was 20 meters.  But it performed well.  The band, on the other hand, didn't.  It was only open to the Pacific Northwest for the most part.  I tried turning it to other directions and was only greeted by several extreme noise sources - power lines, electric fences, bad street light ballasts, that had the noise floor up to about -108 instead of the -124 to -128 that I had gotten used to for the past three weeks since the antenna went up.  It seems that the "anti-contest gods" or at least some drier weather had conspired against me.

I was able to successfully spend a couple hours or more "running" a frequency on 20 SSB, something I had never tried before with my wires and verticals before!  What fun!  ANd the 6500 performed very well.  And when I turned to S&P on 20 for multiplier hunting and again on 40 & 75, the panafall and filters did their job admirably.

Again, I received many unsolicited comments on my audio, this time using my DX/Contesting profile which is a bit more narrow than my Rag-chew profile, rolled off at 165 Hz and 2800Hz, with boosts at the high end, and PROC set to DX+

This was my first contest with the new antenna, but not much of a test, because I needed to change to 40/75/160 for most of the contest, using the dipole and vertical due to band conditions.  It was helpful to have both antennas on 40 meters, since there were big differences between the two, depending upon distance and direction.

My score wasn't spectacular, but could have been a lot more had I been able to operate the whole time.  20 was open mostly when I wasn't able to operate.  (excuses, excuses!) 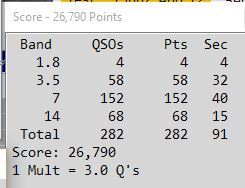 How did some of the "Big Guns" on the board do?
Post your scores.