HOW ABOUT POSTING YOUR CONTEST RESULTS?

KY6LA_Howard La Jolla, CA. Paris and Sablet FranceMember ✭✭✭
September 2014 edited June 2020 in SmartSDR for Windows
In my world in San Diego and especially at the San Diego DX Club, you are considered to be rather subpar if you have not confirmed at least 320+ counties and earned multi band multi mode DXCC However the one thing that will get noticed is when you win contests. Right now Flex still has a serious credibility gap with the Contest Luddites in my world. Nobody used a Flex at WRTC. To my knowledge no one has posted a major score in a contest using a Flex. Until a Flex wins something major, Flex will continue to play second fiddle to K3 and other contest machines. So I am proposing tha people start posting contest results using Flex so that we can show the Luddites that it is possible to win a contest using a Flex To start this off here is a copy of my certificate where I won San Diego Section ARRL DX Contest 2013 using a Flex Hopefully lots of you people can post much more impressive results 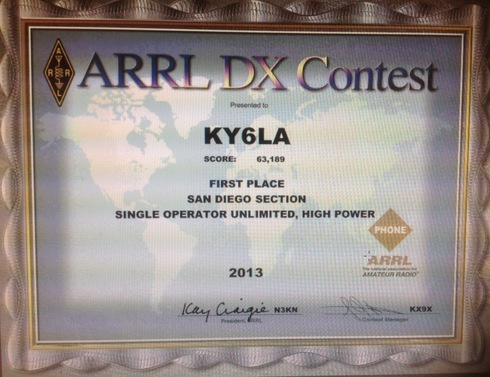