Just started to notice a network problem over passed couple of weeks. Not tried any older versions of SSD yet due to lack of time and work pressures.

The F6k is connected directly via Ethernet cat6 shielded cable to the PC (no switch, no router, no DHCP etc).

It looks like a network packet timing issue. The problem is that the waterfall stutters (almost stops) when SSDR is first loaded. The only thing that fixes it is to disable and then re-enable the Ethernet port on the PC. Then it is totally fine until the next load of SSDR when it again does it pretty predictably.

I'm almost certain this is an initial packet sampling issue as the network pop-up reporters says 1 bar (network poor, Latency <1ms) when the problem manifests itself, along with a small percentage of lost packets. However, even when it is stuttering like crazy on the waterfall, the RX and I think also the TX audio is fine. Also driving the radio is also fine, and other apps are fine too. So it appears that only the waterfall network packets are being dropped / affected by the problem.

Normally my network link is perfect at all other times: for example just done a very intensive 24 hour run contest without needing to resolve any network problem, or do a reboot etc. The result was a lost packet count after 24 hrs = zero! 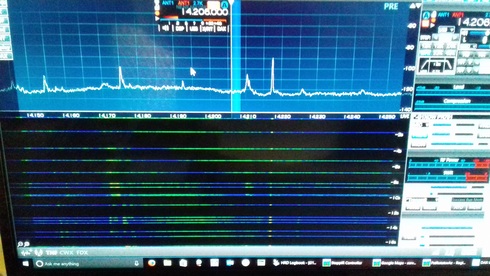