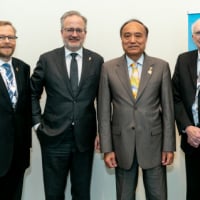 Tim VE6SH Member ✭✭
September 2016 edited May 2020 in SmartSDR for Windows
I was away for almost three weeks. Upon my return and despite the fact the computer was powered off (and I have automatic upgrades turned off)I was greeted with a cheery note that Win10 had done a upgrade. Despite not having issues in the past with WIN 10 upgrades this time it broke both DAX and CAT (and deleted a number of port assignments on DDUtil).

I fixed the CAT issues by repairing FLEX VSP as indicated in the help commentaries. DAX is still an issue and I gat an error that DAX drivers cannot be loaded.

I know there is a fix to reinstall the drivers manually:

However, it states "if instructed by the helpdesk" (I opened a ticket but being a long weekend I suspect I will not hear back until next week).

Has anyone else tried this and did it work? Are there any issues with trying this approach?