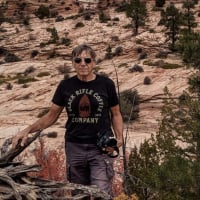 Using FLDIGI one has to calibrate the PC and a procedure to do so has been published.  A variant method follows:

Feed the GPS-10.0Mc output into one of the antenna ports and adjusted FLDIGI audio offset with LSB tuned to 10.001.  This results in a 1.00Kc tone to FLDIGI.  Use this to calibrate the entire received system (DaX, PC etc) with highest frequency accuracy possible.  The assumption is the GPS signal is much more stable / accurate wrt frequency than WWV over HF would be.

After the test, the two frequency measurements are "combined" to remove the drift from the PC side.  Admittedly, "combined" is some hand waving at this point and perhaps the PC doesn't drift enough in the short term to be a concern - not sure. Granted also this is really splitting hairs - or more like a sub-Hz measurement.